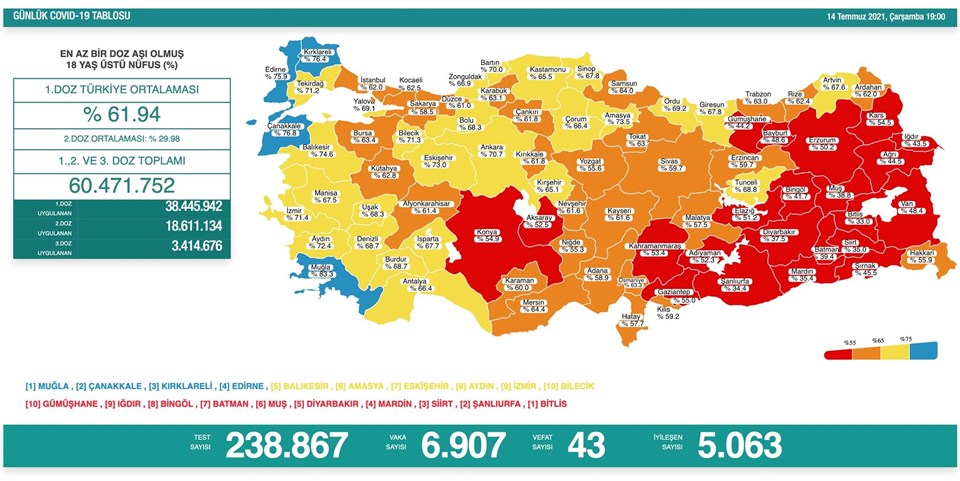 Daily Coronavirus Table by the Ministry of Health was shared from the address “covid19.saglik.gov.tr”.

According to the table, 238 thousand 867 Covid-19 tests were carried out in Turkey in the last 24 hours, 6 thousand 907 people tested positive, 43 people lost their lives, and the number of people recovered was 5 thousand 63.

As part of the fight against Covid-19, the first, second and third doses of 1 million 280 vaccines were administered in the last 24 hours.

The 10 provinces with the highest rate of those who received at least one dose of vaccine were Muğla, Çanakkale, Kırklareli, Edirne, Balıkesir, Amasya, Eskişehir, Aydın, İzmir and Bilecik, respectively.

The provinces with the lowest rate of at least one dose of vaccine were listed as Bitlis, Şanlıurfa, Siirt, Mardin, Diyarbakır, Muş, Batman, Bingöl, Iğdır and Gümüşhane.

“HAKKARI GOES FROM RED TO ORANGE”

Sharing the daily table, Minister of Health Fahrettin Koca pointed out that the rate of people over the age of 18 who received at least one dose of vaccine in Hakkari has exceeded 55 percent.

Everything about the Corona virus epidemic is on ntv.com.tr