Minister Ersoy: All tourism personnel will be vaccinated

Ersoy said that when journalists asked how the restrictions to be applied on April 29 and May 17 will affect tourists, the fight against the epidemic has been continuing for about a year and restrictions are applied at certain periods.

Reminiscent to implement the extended shutdown since Thursday evening Ersoy, “Restrictions no time does not include tourists visiting Turkey. They can wander the streets with their passports as they want, they come from the hotel. Our most visitors to the area important museums and historical sites, it is open to both explain and much more comfortable happening. being a tourist in a way advantageous Plus is happening in Turkey, “he said.

Stating that the Safe Tourism Certificate Program criteria are also applied in the hotels, Ersoy stated that they started the program with 136 criteria last year, and this year they increased their importance even more to 152 criteria.

Mentioning that a very good certification program has been implemented, Ersoy said that the program is given by companies accredited in at least 5 or more countries in the international arena.

Ersoy stated that the hotels that receive the certificate are inspected 4 times a month, 3 unannounced and one with news. 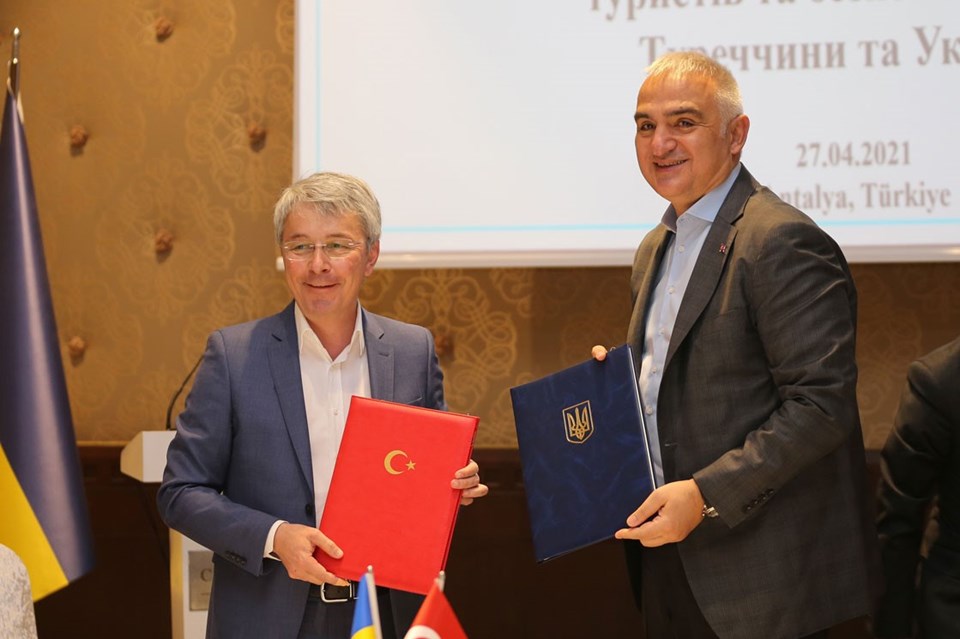 “Which will make Safe Tourism Certificate safer we exceeded all of its tourism employees across Turkey. Aviation industry, airports, travel agencies, tourist transportation. Hotel accommodation or get the Ministry of Tourism licensed restaurants all of them, which are open since last month began vaccinated Subject to the priority All personnel will be vaccinated by the end of May.

Ministers Ersoy, he stressed that it was pretty low last year in tourists returning from Turkey Kovid-19 incidence.

Turkey’s taken that measures are extremely effective that transfer Ersoy, “in tourists returning to the country to come on holiday in Turkey Kovid-19 does rate very very very low, low output enough to be represented by not ten thousand to a hundred,” he said.

Ersoy received certification that the question of how much tourism business in Turkey, not only the hotel of certification programs, tourism transport, airports, reported that extends to the airlines.

“We established a system that will host our guests in the most risk-free way.”
Ersoy, as they attached importance to the bilateral relations and the Republic of Turkey in the long term from the end of the decades-long friendship with Ukraine stressed that much stronger.

Stating that ideas are shared in many fields from trade to energy, from agriculture to customs, from culture to tourism and that they have determined their action plans, Ersoy noted that they held today’s meeting at the tourism point.

Stating that Ukraine is a strategic partner in tourism as in every field, Ersoy said:

“Both the Ukrainians to Turkey, both popular in Ukraine for Turkey and is a preferred destination location. The scope of visa exemption agreement passports between the two countries, the new ID card with it to further strengthen the bond between our two countries, the formation of unrequited opportunity to travel. Especially our country in the epidemic process for the support you have given to tourism Thank you very much.

With the Safe Tourism Certification Program, we established a system that will welcome our guests away from risks. We will host our Ukrainian friends here in a safe environment thanks to the experiences we have gained from 2020 and the mass vaccination campaign we have developed. “

Indicating that Ukrainian language is added to the language options in historical places, Ersoy stated that many archaeological sites such as Galata Tower and Dolma Garden Palace can be visited directly with the Ukrainian guidance system.

Ersoy emphasized that tourism is an indispensable tool for people to understand each other, as well as the development of mutual understanding and empathy.

Turkey’s tourism promotion and marketing experience in bilateral talks, said they had agreed to share quickly with Ukraine Ersoy, after which the mutual tourism development agency will be working much closer, he said.

“UKRAINE, THE MOST FROM ONE COUNTRY TURKEY TOURISTS”

Ukrainian Culture and Information Policy Minister Oleksandr Tkachenko this year’s Ukrainian tourists to the question of how much is expected to come to Turkey, gave money that Ukraine is one of the countries sending the most tourists to Turkey.

Safe Tourism Certification Program and Tkachenko stating that it was gratifying that vaccination of the industry, “hotels in the red zone in Ukraine is worth considering even open and that. Next to me were 60 tourists arriving by plane. How to tell what tourists arrive plans pity. But Ukraine most Turkey “It is one of the countries that send tourists to Turkey,” he said.

“IT IS USEFUL TO HAVE UKRAINIAN GUIDES IN THE ORIGINS”

Oleksandr Tkachenko, Minister of Culture and Information Policy of Ukraine, said that the epidemic process should be evaluated not only as a struggle but also as an opportunity.

They found tourism measures in place, the opportunity to examine in Turkey expressing Tkachenko, “Safe Tourism Certification Program area saw hotels, we were very pleased. There are many historical monuments that could affect our tourists and especially in Antalya in Turkey. The absence of around here Ukrainian tour guide was extremely helpful. Ukraine Turkey will also be increased with time, that I am satisfied. ” he spoke.